The Lac du Bonnet Foundation’s main goal is to support worthy projects within Lac du Bonnet and the surrounding area.  Any project of a charitable nature, big or small, that will benefit the community in a way that makes Lac du Bonnet a more livable, secure and caring community will be considered for financial support.

So far this year, the Foundation has awarded $7,265 in grants and an additional $3500 in scholarships and bursaries. In 2021, the Foundation granted a total of $26,744 to student awards and projects that benefited our community.

The Lac du Bonnet & District Charitable Foundation is a Community Foundations of Canada member and Canada Revenue Agency registered charity.  The monies granted are derived from returns on investment of an endowment fund managed by the Winnipeg Foundation on behalf of the Lac du Bonnet Foundation.

The Lac du Bonnet &District Charitable Foundation is pleased to announce the recipients of the Chuck Reynolds Memorial Scholarship and Winnipeg River Bursary for 2022.

The Chuck Reynolds Memorial Scholarship Fund was established in memory of Chuck Reynolds, a well-respected teacher and former Vice Principal of Lac du Bonnet Senior School who, after retirement, went on to serve three terms as an Agassiz and Sunrise School Division School Board Trustee before his untimely passing in 2015. The Chuck Reynolds Memorial Scholarship is awarded to Lac du Bonnet graduates who demonstrate academic excellence or achievements in athletics, the arts, trades, the environment, or social justice.

The Winnipeg River Bursary Fund was established in 2016 by Gus Wruck, emeritus member of the Lac du Bonnet Foundation. Each year, this award is presented to students from the Lac du Bonnet area enrolled in continuing education where the field of study has possible relevance or benefit to the Lac du Bonnet Region. Bursaries of up to $1000 are provided to a deserving student(s) based on relevance, need, and the availability of funds.

The 2022 recipients of Winnipeg River Bursaries are Courtney Yerex, Serenity Poirier, and Abbee Pelland, all of whom graduated from LDBSS this year. Courtney received a $500 bursary and will be pursuing her educational goal in graphic design at the Visual College of Arts and Design in Calgary. Serenity received $1000 to pursue a degree in microbiology at the University of Manitoba. Abbee also received $1000 and will be entering a pre-med program at the University of Winnipeg.

Congratulations to each of these deserving recipients (pictured with LDBSS Principal Chrissy Viznaugh)!

On May 18, 2022, the Lac du Bonnet & District Charitable Foundation held its Annual Public Meeting and Celebration of Giving.  A large part of the evening was dedicated to the celebration of projects funded by the Foundation in 2021 and the announcement of grant recipients for Spring 2022.

The LDB Foundation is pleased to announce that $3,000 was granted to the Town of Lac du Bonnet on behalf of the Fire and Water Festival for the Spring Funding Session.  These funds will go towards the purchase of new speakers and a sound mixer.  Marie Heibert, president of the Fire and Water Festival, was on hand to accept the award from LDB Foundation President Gary Rollins and Treasurer Dick Campbell.

Lac du Bonnet Regional Library representatives Jennifer Hudson Stewart (Head Librarian) and Karen Dave were also present to receive a $1,500 grant to help purchase a tent canopy and fencing for the Library. These items will be used to provide a safe outdoor environment for the children’s outdoor reading program.

The Lac du Bonnet Foundation congratulates both of these organizations and looks forward to seeing these community projects unfold.

The next LDB Foundation funding deadline is September 30, 2022.  Please visit the Lac du Bonnet Foundation website at www.lacdubonnetfoundation.ca for application forms and more information on how to apply

https://lacdubonnetfoundation.ca/grants/grant-recipients/ for a full list of grant and scholarship recipients since 2010.

After a one and a half year break due to Covid-19, the LDBSS Youth in Philanthropy Committee (YIP) is pleased to announce that it is up and running again as part of the school’s Student Council.

YIP is the youth arm of the Lac du Bonnet & District Charitable Foundation. This leadership program is supported by the LDB Foundation and is designed to introduce young people to philanthropy and community development. The program at LDBSS provides students with hands-on experience working as a team to learn about and help local charitable organizations.  Building an endowment fund, learning about community needs, and engaging in the granting process are all part of the experience. 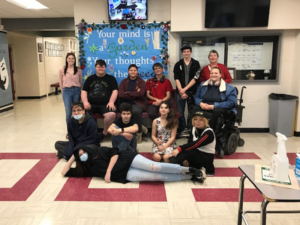 As one of their first acts of this school year, the LDBSS YIP Committee awarded a grant of $4700.00 to Sunrise School Division towards the purchase of laptop computers to assist students in the Lac du Bonnet area that do not have access to this technology for remote educating. Coupled with a $5300 from the Lac du Bonnet Foundation, a total of $10,000 was granted for this purpose.

The YIP Committee is committed to learning about and supporting community needs.  The next grant deadline for YIP applications is Fall 2022. Applications for YIP grants can be found on the Lac du Bonnet Foundation website at https://lacdubonnetfoundation.ca/about-y-i-p/