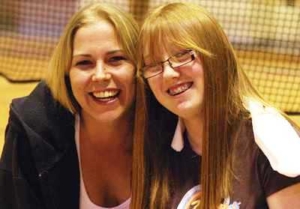 Amanda Gooding (left) and Carly Zarecki had their hair cut for a good cause March 18.

Amanda Gooding (left) and Carly Zarecki had their hair cut for a good cause March 18.
Carly Zarecki just had the first haircut of her life – and she’s in Grade 9. The Lac du Bonnet Senior School student had 12 inches of her golden locks snipped March 18. The hair will be used to make hairpieces for cancer patients. The young girl also raised more than $2,000 in pledges, which will go to the Lac du Bonnet Charitable Foundation. The was admittedly a little nervous prior to the cutting, which was done by stylist Adele Vaillancourt, who donated her time and will cover costs to ship the hair to Anola to be made into wigs.

Zarecki began her quest just prior to Christmas. She’s been growing her hair for many years in honour of family friend Ashley Kovari, who died of a rare form of cancer eight years ago. She decided that once her hair reached 36 inches, she’d have 12 inches cut off to donate to the Canadian Cancer Society.

The recently-formed Lac du Bonnet Charitable Foundation was also uppermost in her mind. “I thought of Ashley and wanted to do what I could to help,” Zarecki said. She was joined in her hair-cutting adventure by Lac du Bonnet’s Amanda Gooding, who also had 12 inches snipped off. Gooding hasn’t had a haircut for nine years. “It’ll grow back – I’m not worried,” Gooding said.

Senior School principal Ron Sugden said everyone at the school is proud of Zarecki for starting her initiative. Senior School teacher Becky Reynolds also had her hair cut and donated just prior to the event. Gooding raised more than $400 herself to go the foundation.

Zarecki’s grandfather, Walter, said it was quite the shock to see her without her long hair, which hung to just above her waist. “That’s one thing I’ll always remember about her – that long hair,” he said.

So how did Zarecki herself feel about having a much shorter hairstyle? “It feels a little weird,” she said with a laugh. Lac du Bonnet’s Doris and Kylie Lussier also recently donated their hair to the cause.